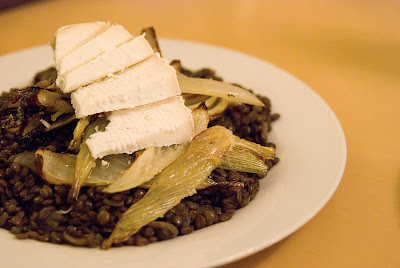 Is fennel in season right now? I know the first rhubarb is showing up. But I don't know if fennel is particularly in season and that's why it's been on my mind or if it's something else...

I cooked the Puy lentils in my usual manner but instead of a glug or so of wine my hand slipped (and there was more in the bottle than I thought) and I poured in about a half a cup- hence the drunken lentils. Atop the boozy legumes was a bulb of roasted fennel with parmesan cheese and Ticklemore cheesefrom Broadway Market. Simple and lovely dinner for a Thursday night.

One onion, chopped
A shallot or two, chopped
Two cloves of garlic, chopped

Herbs (either a bushy spring of rosemary or a few twigs of thyme)- sometimes destemed and chopped, other times lazily thrown in in one piece)

One cup of rinsed Puy lentils

Fry the onion, shallot and garlic until they start to colour and begin to stick to the bottom of the pan. Add the herbs and then deglaze with the wine. Add the rinsed shallots and two cups of stock/water. Bring to a boil and simmer for 25 minutes until tender.
Posted by Leah Bevington at 4:59 PM No comments: 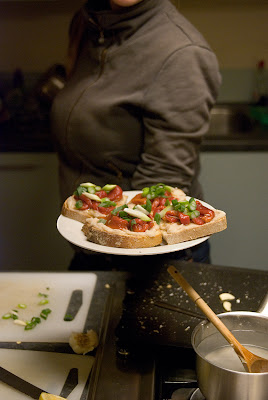 Oh god. The title isn't long enough to describe what we had for dinner. It should read 'roasted & marinated red pepper and garlic with lemony cannellini bean paste crostini'. Even that doesn't really begin to explain to you how good dinner was.

The recipe is, again, from Ottolenghi. I am cooking my way through this book. As should you. Everything I have made has been stellar. And distinctive. There is a definitive style to their cooking but it really works with where I've been wanting to take my own cooking. (Think Claudia Roden, Crazy Water, Pickled Lemon, Moro)

Eat and rejoice that food is so damn good.
Posted by Leah Bevington at 10:37 PM 2 comments: 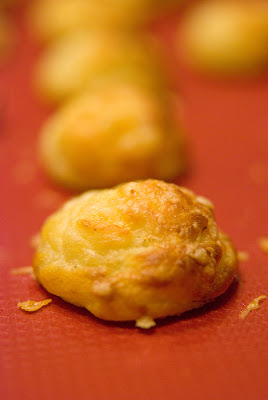 When I was a kid I made choux pastry with my mom and we filled them with all manner of lovely sweet things - custard, whipping cream, chocolate mousse, et al. It seems to me now that I loved making them then because they were cute, delicious and infinitely moreish.

So when David Lebovitz made a savory version called gourgeres for a post New Years Eve drinks partay at his (no doubt lovely and welcoming) flat in Paris, I was besotted and decided that I had to make them. I had forgotten how much I liked making choux pastry. (It's very satisfying for some reason.)

Anyways, I was not having a partay (maybe I should have - anyone want to do a wine and gourgeres evening in East London? call me!)and, there being only two of us, I made half his recipe. Which was relatively easy to do, measurement wise. David's makes 30. SO, mine should have made 15. Right? Right.

Except in my tired brain I thought - half the amount of ingredients. Should make them half the size. Which made topping them with extra cheese slightly more difficult! But they were delicious all the same and we ate them all.
Posted by Leah Bevington at 10:24 PM No comments:

I appreciate when food bloggers have a top ten list, or a list of favorites. I regularly check when I'm looking for dining out inspiration. So here is my list of London favorites. These are the places we go to again and again, the places I want to take friends when they come to visit Leah-London.

There's only four of the top of my head. But I expect the list will grow. But these five are solid.

1. Arancina - Italian in Bayswater. Owned by the friend of a friend they have fabulous everything. But my absolute favorite, must-have every time we go is their escargot in a tomato-fennel-pernod sauce. Amazing delicious and so unique.

2. Prince Arthur - Just north of London Fields. This is our local, that takes us a twenty minutes walk, past five other completely suitable pubs. But this one is lovely and warm with great food- green olives with mint, basil and lemon; deep fried jam sandwich with clotted cream ice cream; oysters; great chips. Love on a Sunday.

3. Ottolenghi - Is there nothing they can't do? I've got the cookbook and everything I've made has been brilliant. Their brunch/lunch menu continually surprises and delights me - and even though getting a table at the Islington branch is a bit mad, I heart them.

4. Tayyabs - Tucked behind a mosque and a synagogue just off of Whitechapel, Tayyabs is crazy busy. Ridiculously long cues that wind through the restaurant, an element of chaos. Fluffly naan, killer lamb chops, amazing lassi. Bring your own booze. Super.
Posted by Leah Bevington at 2:37 PM No comments:

Long ago I signed up to some weekly newsletter for some random farmer's market in California. I like the sidebar that tells me what's newly in season every week.

This week there was the following article, which I want everyone to read it.

Editor's note: At CUESA we believe that local meat from humanely raised, pasture-based animals is a sustainable choice. By expanding our awareness of just how many resources go into a single piece of meat, we are more likely to make conscious choices and to appreciate more fully the meat we do eat.


Mark Bittman wants you to eat less meat. In his typically disarming way, The Minimalist — as he's referred to in his New York Times column, as well as online, where he writes a blog and appears in short cooking videos — will dish it to you straight.

At a recent appearance at the Ferry Building’s Book Passage, while promoting his new book Food Matters, Bittman told a room full of fans: “You can’t be an environmentalist unless you care about how much meat you eat.”

Bittman is well known for his books How to Cook Everything and How to Cook Everything Vegetarian. Food Matters expands on his idea that “if you buy your own food and cook your own food, you tend to put much better things in your mouth than if you don’t.” Thanks in part to a realization he had after reading the UN report called Livestock’s Long Shadow, and to his decision to tackle some of his own health issues head on, The Minimalist is now advocating an even larger shift. In the vein of Michael Pollan's now well-known creed, "Eat food, not too much, mostly plants," Bittman has the potential to reach a broad audience of home cooks who may have not read Pollan's books or seriously consider their food choices from a sustainability perspective.

Here’s how Bittman breaks it down: industrial livestock production accounts for 18% (1/5) of the greenhouses gases currently being emitted and ranks above transportation as a contributing factor to climate change.

The average American eats a half pound of meat a day, which accounts for 1/6 of the world’s livestock consumption. As the developing world begins to eat more meat and countries such as China take on behavior similar to ours, the projected global demand for meat will be 120 billion animals a year (or twice what we currently consume) by 2050.

“I know statistics are numbing," says Bittman, "and these numbers may seem like no big deal, until you consider that it takes 70% of all the available farmland in the world to produce the meat we’re eating now – whether it's land the actual livestock take up, or it’s being used to grow the corn and soy that feed livestock.” And, he points out, if demand does go up to 120 billion animals, you’d need an impossible 140% of the world's arable land.

“The land just isn’t there,” says the chef-turned-environmental-advocate, adding that meat production can’t get any more efficient (“and the efficiency we’re experiencing now comes at the expense of animals’ well-being"). Bittman also makes a comparison to Americans' dependence on fossil fuels. “The resources aren’t there in order to grow unless people change their behavior. So we have to — for lack of a better word — conserve.”

Bittman himself now eats a vegan, whole grain-based diet for the first two meals of the day and allows himself to eat "whatever he wants" for the third. In other words, the recipes in Food Matters are the direct product of his own at-home experiments. The book is also full of concrete suggestions as to how to accommodate a more plant-based diet. He recommends making a frittata, for instance with a much a higher ratio of vegetables to eggs than average. Or a spaghetti sauce “spiked” with a little meat for flavor, but loaded with vegetables. He also encourages his readers to get to know a few delicious ways to prepare beans and other legumes, so as to incorporate them into weekly meal planning in place of some meat-based dishes. See Bittman’s whole grain granola recipe here.

Most importantly, Bittman is asking his audience to think incrementally, and to start where they’re comfortable. “If we ate nine billion animals in the US next year instead of 10 billion, that’s still a significant change,” he says. As for his own love of meat, Bittman says: “I’ll never stop eating animals, but it is time we stopped raising them industrially and stopped eating them thoughtlessly.”

Made Bittman's granola. Also try Nigella's Andy's Granola. It is the best, but a bit more work.
Posted by Leah Bevington at 2:52 PM No comments:

Awhile ago I made the Sweet Potato Gratin from Ottolenghi. It was great. A definite 'make again'. So I was at home myself the other night with a lone sweet potato and I thought I'd make that for dinner.

Only I improved it.

I love that the Ottolenghi recipes are so approachable and yet once I've made them the first time I have the confidence to play with them. And that is fantastically fun cooking!
Posted by Leah Bevington at 1:41 PM No comments:

I've always been somewhat disturbed by mortadella. Despite its Italian roots (which would imply it is most likely delicious), I can't help but feel like it's unnatural, chemical-laden and that it's essentially the European equivalent of baloney. I realize that's probably a controversial statement, but then a friend delivers this into our hands: 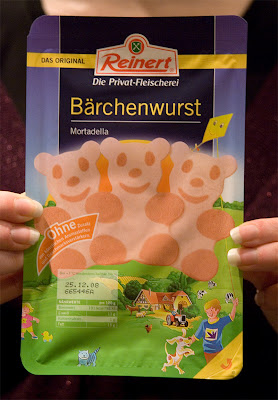 Creepy bear-shaped mortadella? Yeah, I think my point is valid.
Posted by Design Monkey at 7:28 AM No comments:

My mother makes a fantastic Christmas spread every year. The menu is utterly dependable (much to her chagrin) and always delicious. It's also her thing, and her tradition (albeit for us). It is sadly not appropriate for two people celebrating Christmas far from their families in eerily quiet London. I can't do Christmas like my mom does- and I don't think I should try. But she does have a reputation for fantastically fabulous New Years Eve meals. So in the spirit of that, I made Christmas dinner for C and I.

Not particularly difficult (I think it took me an hour to make, which was good as it was 10:00 pm before we had called everyone and were ready to start dinner), not a decadent, heaping amount of food. Lovely beautiful flavours that sang. Quite possibly one of the best meals I've ever made. 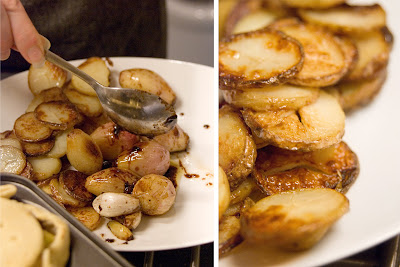 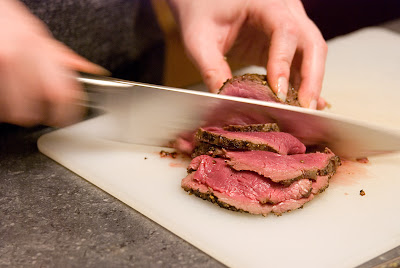 Oh god. And a special bottle of Cote du Rhone. 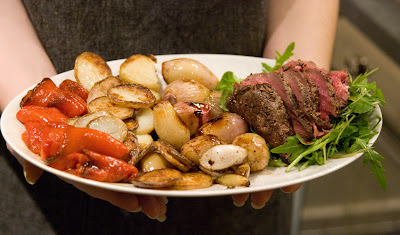 Posted by Leah Bevington at 1:22 PM No comments: