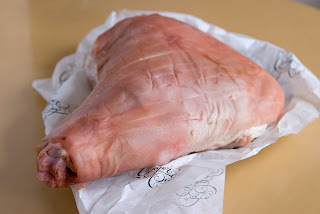 I'm a flexatarian with four kilos of pig in my fridge. (See the photo of one I prepared earlier - that one was even bigger!)

(As much as I hate cutesy terms and non descriptors I can identify with flexatarian. I'm not a vegetarian. I enjoy meat and I want to continue eating it. I'm not a pescatarian, a term which annoys me. So someone who doesn't eat very much meat and who regularly chooses veggie over meaty- yeah, I can work with that. )

Focus - FOUR kilos of pig. A pig shoulder which is currently nestled in the fridge with a rub (rosemary, fennel, garlic, chili, preserved lemon) waiting for the morning when I will pop it into the oven for six or so hours.

How does a flexitarian justify four kilos of pig? Isn't a flexi just a lazy, or uncommitted, vegetarian? Isn't FOUR kilos rather excessive?

Let me climb on my soap box and tell you want I think about meat...

I like bacon. I think there are few homier meals than a roast chicken. Steak makes me salivate. Food is a celebration and for us Anglo Saxons a big chunk of meat is traditionally the centerpiece. Food equals love. So I can't imagine becoming a full vegetarian and giving up these bits of comfort and love and tradition. But learning about meat, all about it, from health issues to ethical to environmental to consumer issues, makes it very difficult for me to eat it the way I used to and the way I cook and the way I eat has shifted substantially in the last few years.

We eat much less meat than we used to. It features as the centerpiece of our meals maybe once a week and gets used as flavour and side bits two or three (two rashers of bacon in pasta, a sausage in soup). The meat that we do eat comes from either the butcher in Broadway Market or the Ginger Pig and is brought up and butchered in a way that I feel good about. I feel good knowing that the meat that I buy satisfies every tickbox I have against the long list of "Meat is Bad".

I recognise that it is expensive. I recognise that I'm really lucky that I have these options. But it is a choice and a commitment that I am happy to make. (And since this is my blog it is my soap box and I can sing the praises of happy meat to my hearts content.)

As for the FOUR kilos of pig in the fridge. It's a lesser known cut, so less expensive, will be succulent and last us for many many meals- or at least one great meal with friends.

Join me on my soap box next time for "Why the tuna in your sandwich is like eating elephant".
Posted by Leah Bevington at 12:05 AM 2 comments: