Since moving here I have discovered all sorts of lovely seasonal specialities. Things that exist in Toronto but weren't as available or as obvious to someone who wasn't actively looking for them. Maybe part of the reason my cooking spidey senses have learnt so much in London is because so many of the cookbooks I read were, and are, British. I felt like I knew Borough Market before I ever set foot there and the Ginger Pig was like discovering an old haunt - I knew them. But I have never had that same relationship with Canadian food writers - there's very few that I can even name. Maybe it is that old thing with you are never satisfied with what is around you - grass is always greener. Or that Canadian food as such never really inspired me because there wasn't much distinctive about it. Who knows. My last trip to Toronto was delicious - so many great restaurants and dishes. I think maybe it isn't just Toronto that has expanded and grown - maybe I have too so that I am looking and seeking out those experiences. Also helps that I have a bigger budget than when I lived there. Little things. You know. 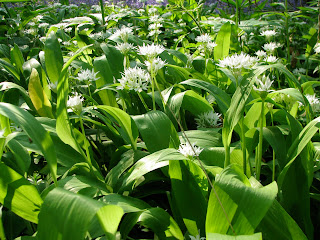 Anyways the point is that I had never had wild garlic (or ramps as I think some people call it though I am confused between ramps and the wild leeks that appear in the spring...) before moving to London and it has become one of those sure signs of spring to see the deep green leaves with white flowers in bunches in the market.

Another sure sign of spring is bluebells. Fields of bluebells in the forests of England, and what grows hand in hand with bluebells? Garlic! Fields of pungent white garlic flowers next to lovely bluebells. So beautiful. So smelly. But in a nice way. And so delicious. 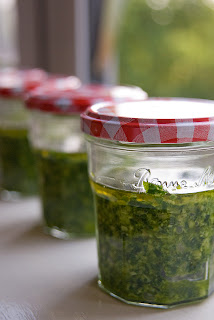 I was gifted with an obscene about of garlic leaves. They don't last long once plucked so I needed to do something with them fast. So I made wild garlic pesto - four gleaming emerald jars of the stuff which we ate over fresh pasta - plain the first time and then beet (a lovely pretty pink colour with just a hint of beetiness to it) the second.
Wild Garlic Pesto
100g wild garlic
50g pinenuts
50g parmesan
1 shallot
1/2 tsp salt
Pinch of sugar
About 200ml olive oil
Process until as smoothy or as chunky as you fancy in the food processor and taste for seasoning.  Pack in old jam jars and push down to get any air out. Gently pour a thin layer of olive on top and pop in the fridge. Covered like this it should last 2-3 weeks. But I have never had it last longer than a week or so, because we have eaten it.
Divine. Special. But also enough that I am done for a bit and will be just fine waiting until next year's crop. Except for the wild garlic butter in the freezer - I mean clearly that is going to be eaten on steaks. But after that we're done. For real this time.
Posted by Leah Bevington at 11:41 PM 1 comment: 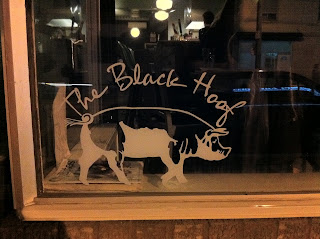 You should go to Toronto and eat at The Black Hoof. Unless you're a vegetarian. If so skip to the next post.

C was off at a bachelor party, Susie was in London, so Nathan (from Back off Ladies, He's Taken) and I shared a an epic set of moments over a fabulous meal. Each dish. Each mouthful was transcendent. I'd tell you what we ate but it doesn't matter because the menu will have changed by the time you get there. Trust them. Eat everything. Let them pick your wine. Let them bring you a cocktail. Put your appetite in their capable hands and enjoy something special.

"Everything is made: from the charcuterie to the cocktail garnishes. Things are foraged when possible. It’s a meat and off-cut centric menu to be sure, but there is always a fish option. There is much attention to detail in the service. The atmosphere is boisterous and casual."

So much love.
Posted by Leah Bevington at 3:54 PM No comments:

I have become obsessed with crumpets. Specifically crumpets with butter and red berry jam (strawberry or raspberry) at Climpson's alongside my flat white. These are best eaten for elevenses with either a book or a small pad of paper for jotting down random thoughts while watching the people and characters of Broadway Market go by.

Seriously though - I have started waking up thinking about my mid morning snack. In Toronto I missed them and thought about them - even went to the amazing kitchen store by the Toronto Reference Library to buy crumpet rings so I could make my own. (They were out but expected a shipment later that day.) When we got back from Toronto the first thing I did on Tuesday was to go to Climpsons. They were out of crumpets. My face must have been so crestfallen and heartbroken because when I went in today the guy brightened up and told me with a smile that they had crumpets today.


I think it's the texture mix that delights me - the crunchy outside, warm from the toaster and the soft inside with holes running with butter and jam. (You need to put butter on a crumpet. Butter, then jam. I feel very strongly about this, even though I don't do the same for toast or bagels or muffins.) When I bite into a crumpet I feel satisfied and full in the way that only satisfying a deep craving can make you feel. Just a simple crumpet. Go figure.
Posted by Leah Bevington at 12:35 PM No comments: