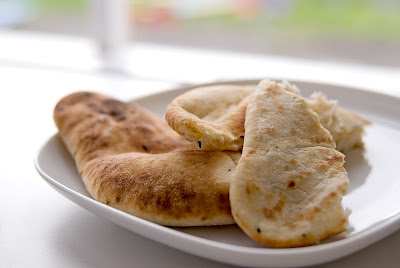 There is something incomparable about naan, that delicious, almost ubiquitous Indian bread. I've heard tales about people who make their own pan-fried variants at home, but I have always been skeptical. After all, proper naan is slapped onto the side of a tandoori oven and fished out with metal hooks of questionable hygenic standards.

One of the things I miss about Toronto is being able to buy President's Choice (a brand that is the equivalent of Tesco's Finest) naan from the local grocery store. I've been on the lookout for a substitute here in the UK, and I think I've found it. Sharwood's makes a fantastic mini-naan, with four to a package.

And the best part? Instead of heating it in the oven, you put it in the toaster. That's right: toaster naan.
Posted by Design Monkey at 9:00 PM No comments:

I am, all things considered, a pretty good good. (She writes modestly.) I can cook. I can follow a recipe. I can make things out of nothing. But very occasionally something goes wrong. I can count four things that were so bad I couldn't even eat them:
(they all start with the letter 'p'- isn't that strange?)

Tonight I have redeemed myself. Tonight dinner was awesome and good and quick and easy and filling and cheap.

I made pad thai and it was good.

I've had this recipe bookmarked in my Make Me folder for ages and finally decided to make it tonight. It's not so much of a step by step recipe as it is a suggestion for how to achieve awesomeness in a bowl - and isn't that what we're all looking for?
Posted by Leah Bevington at 10:57 PM No comments:

Half a perfect avocado on multigrain toast with a few pieces of crispy bacon, generous parmesan shavings and a simple balsamic vinaigrette.

That was in October 2007 and every time I pick up an avocado (like today, inspired by Shauna's post) I think of it...
Posted by Leah Bevington at 7:05 PM No comments:

About Curiosity & the Cupcake

Curiosity & the Cupcake is the name of the bookstore/bakery I would run if I wasn't so busy saving the world's archaeological heritage, helping to fix the UK's healthcare or getting overly excited about food policy.

It came about as C & I were wandering back from the St Lawrence Market in Toronto via the lovely  Nicholas Hoare bookshop while discussing our plans for the Italian espresso bar we'll have in our office (one day) and bemoaning the lack of a bakery in our neighborhood.

C&C would be about lovingly chosen books and a small, bespoke and ever-changing selection of baked deliciousness. We would have space for artists to hang their work, and cosy chairs where you could read and enjoy a proper (one size only) cappuccino or where you'd meet your friends (maybe we'd start a cookbook club?) for a snack.

It would never make a profit and it would be filled with love.

Instead I have this blog. Which will also never make a profit and be filled with love.
Posted by Leah Bevington at 8:26 PM 1 comment:

An Excellent Korma, Not Patak's 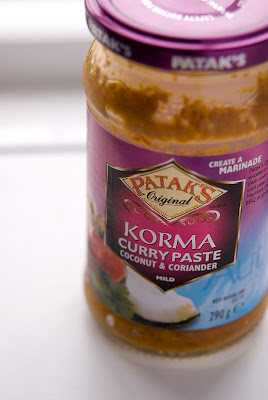 Patak's is a bit of an institution in Indian Cuisine. Ever since I can remember, my mother usually had one or two bottles of Patak's in the house – usually one was an Indian pickle (if you haven't ever had one, imagine a savoury, spicy relish made from mangoes, limes or carrots), and the other was a cooking sauce.

Since cooking Indian on my own, I've relied on Patak's for the same: a bottle of pickle, a bottle of cooking sauce. Their Vindaloo paste is phenomenal, and I swear by it, despite having made vindaloo from scratch on a number of occasions. So, I was pleased to see that Patak's offers a korma paste, as chicken korma is one of my favourite dishes.

Here's the thing though: Patak's chicken korma sauce isn't very good. In fact, it's poor. The sumptuous, rich flavours that inhabit a chicken korma are missing. I've tried using more paste than the directions call for, less paste, varied the simmering times, and so on. Nope. No good. The half used bottle in the photo above is almost certain to stay that way until we clean out the fridge.

In steps Madhur Jaffrey, the definitive Indian cook. She's another institution – I remember getting her huge, red cookbook out of the cupboard for my mother at least three times a week.

Madhur Jaffrey knows her korma. And it's beautifully quick, simple and delicious. I've cooked hers a number of times and made some changes.


Put the ginger, garlic and 3 tbsp water in a blender. Blend until you have a smooth paste. If you don't have a blender (we don't, despite L constantly pointing them out to me), just chop/press the garlic as finely as possible and grate the ginger with the smallest grater tooth possible.

Get the oil nice and hot in a wide frying pan. Once hot, put in the bay leaves, cinnamon, cardamom pods, cloves and cumin seeds (if you don't have the cumin seeds, don't worry about it. I never seem to have any, and it still turns out). Stir once or twice and put in the onions.

Stir and fry for until the onions turn brownish. Don't mess this part up. Be patient. I think my mother once told me that properly cooked onions are what make Indian food so delicious.

Once your onions smell delicious, without any trace of harshness, add the paste from the blender, and the ground coriander and ground cumin and fry for a minute. Then throw in the tomatoes and fry for another minute. Stir like mad if anything is sticking.

Toss in the chicken, chilli powder, salt and the water. Bring to a boil (this should be very easy, considering your pan was nice and hot when you added the spices at the start, right?). Cover, turn the heat to medium and cook for 15 minutes, stirring once in a while.

Finally, add the cream bit by bit and cook on high heat for another 7-8 minutes or until the sauce has thickened. Stir gently as you do this.

Serves 4 without leftovers. Serves 2 with enough for generous seconds. Enjoy.
Posted by Design Monkey at 3:26 PM No comments:

The Design Monkey is actually C.

C is my lovely, long suffering partner who caters to my whims and taste tests all my experiments. He is also the reason that C&C looks so nice. (He's a designer and photographer.)

C is also a fabulous cook. He makes (among other things) great Indian food and my favorite chicken noodle soup. Since this blog is really about the food he and I eat together and he works on it as much as I do, it seems like he should get to put in his two cents/tuppence every now and then, so he's officially on the blogroll now.
Posted by Leah Bevington at 10:32 PM No comments:

When C & I lived in Toronto, Saturdays nearly always began with our weekly trip to the St Lawrence Market. We had our friendly butchers who flirted with me, the lovely lady who sold fruit and the fish guys who filleted our fish. We knew them, they knew us, it was a great sense of belonging and it was the first thing I knew I'd miss when we got to London (besides our wonderful friends- love you!).

Fast forward to April and our new life in East London. We have rediscovered Saturday Morning Markets days with a weekly wander to Broadway Market. The pork guy is beginning to recognize us, as is the two guys who sell gorgeous bread (must be early to get what you want), the coffee people (not the first stand but the one closer to London Fields) are starting to offer suggestions on different beans, remembering what we've tried the week before (Peruvian is my favorite so far). It begins to feel like maybe we might just belong here one day too.

But my favorite market find is Gujarati Rasoi. And the man who runs it definitely recognizes us. He and his mom run this amazing vegetarian Indian food stand- they cook the samosas up right there and they are hands down the best I have EVER eaten. Everything we have tried has been delicious (who knew veggie could be this good?!) but my favorite is the Samosa Chatt- a samosa atop a curry of chickpeas and potatoes with tamarind and yogurt-coriander sauce topped with crunchy puffed rice. Heaven in a little brown box.
Posted by Leah Bevington at 3:46 PM No comments: