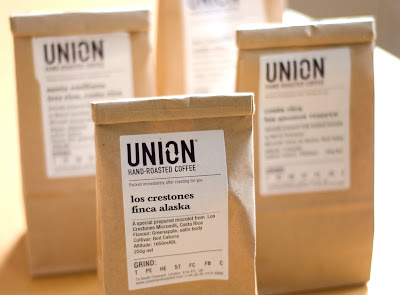 A little knowledge is a dangerous thing – the barista has been making my Americano incorrectly. Two weeks ago I wouldn't have known but now, it's driving me nuts and I'm too Canadian to say anything so I will passive aggressively blog this instead. 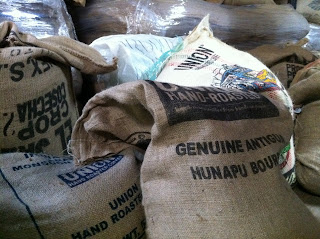 I recently spent a Saturday with a bunch of food bloggers at Union Roasted in E16 learning about coffee. Union ticks many of my boxes: it's a business run by two "plan B" guys, Jeremy and Steven, who were doing something else when they fell in love with coffee and decided to pursue it. They're hands on. Small batches. Know their suppliers. Passionate about educating the people who buy and make their coffee so that the last stages of its preparation bring out the best in it. They have their finger on the bean from farm to cup. This is dedication, obsession and the reason it's so damn good.

My group spent the first part of the day in the Roastery roasting a batch of beans and asking Jeremy and Steven random questions. It takes about 15 minutes to roast a batch of beans. It's 15 focused minutes as the roaster checks the beans every few minutes to see the progression, watching the colour change and hearing the sound of the beans shift as they get closer to being done. They roast every batch of beans like this. In comparison, big corporations roast their beans super quickly over a gas flame, a process called Fluidized Bed Roasting that can take as little as 30 seconds.

Next we went into their tasting room and we went through the process that they take when evaluating coffees. I've heard of cupping before but didn't really know what it meant (and secretly snickered when I read it because it does sound a bit naughty). The process of smelling the grounds, pouring the water and brewing it then smelling again, breaking the crust and then preparing it to taste by the aerated spoonful are far more involved than the pouring and swirling you do with wine tasting.

After a quick lunch, we were on to the machines to learn the technique for pulling a proper espresso and stretching the milk. I don't have a machine at home so I won't be able to use my new found skills but I'll be able to judge the people who are making my coffee. ;) The girls who were teaching us could tell from a moment's sound what had gone wrong – dry milk or an improperly tampered down espresso.

One of the most interesting discussions of the day turned around what to do when presented with a crappy cup of coffee. Many of us said we don't drink coffee in restaurants because we expect it to be bad. When we get a crappy latté at a cafe, we sigh and drink it anyways but remember not to go back there again. We don't demand the same level of quality from our coffee as we do from our wine, or our food. If a restaurant has a sommelier why don't they have an expert barista on staff as well? Why isn't your coffee at the end of a meal as well thought out and presented as your main course?

As coffee gets more expensive I think (I hope) that people will start to demand more attention to their coffee. If I'm paying £5 for a flat white (and it's coming people, don't kid yourself), I want it to be made with the best beans and the best skills. I won't have someone ruin my Americano by scalding my espresso with boiling water. So why am I putting up with it when I am paying £2? No more. I will not have beans that have been lovingly farmed and roasted ruined by someone who simply doesn't know any better.

I left the day with bags of gorgeous coffee. I sent some to C's office (they are coffee fiends) and happily drank the rest at home. My favourite, from cupping and drinking at home, was Los Anonos from Costa Rica  grown under a canopy of avocados. If you order using the code curiosity10 you'll get 10% off.

I love the Union Roast approach. I follow them on twitter and they tweet their travels to visit coffee producers. Their blog talks about the job and the trip and the joys and sorrows and the people who grow their beans. Like I sadi, this is a food product that ticks all my boxes – delicious, responsible, passionate.
Posted by Leah Bevington at 6:11 PM No comments: